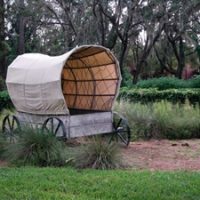 For many kids, sitting in class can quickly become boring. Lectures or documentaries may not be the most interesting or engaging content, and plenty of students don't pay attention. Children often learn better from interacting with the subject matter, and parents can encourage this by helping their kids at home. Here are a few historical moments to reenact together to better your kids' understanding for class:

The Gold Rush
Have you ever played the Oregon Trail computer game? This fun activity places players in the mid-1800s when the gold rush began. Immigrants who lived on the East Coast of the U.S. suddenly began migrating to the far west in California in search of riches and a better life. Families picked up their meager belongings and crossed the entire country in covered wagons, fighting off diseases and hunting and gathering what they could along the way. Kids love learning about this time because being in the wild sounds like a lot of fun. Encourage your kids to build their own version of a wagon and spend their time "traveling" and talking about what they see and game they eat. They can play the game, "If I had a million dollars" but as, "If I had a lot of gold," imagining what people at this time would want to buy and why they left their homes.

Paul Revere's ride
During the Revolutionary War, Paul Revere rode toward Old North Church in Boston's North End, alerting the sexton that two lanterns meant the British were coming by sea. The English troops were heading for the Americans, and without that historic two-lantern signal, the Revolutionary War may have been lost. Turn your living room into Boston Commons, with the Old North Church on one side and the Charles River on the other. After telling the church custodian to light two lanterns, alerting the troops, Paul Revere crossed the Charles in a rowboat to tell patriots in Charleston of the incoming raid. Don tri-corner hats and long cloaks before enacting this historical moment!

Have your kids create their own picket signs after thinking about what they would say if they were being treated unjustly because of their race. Then, march through the house or yard. One child should play Martin Luther King, reciting his speech for your whole family to hear. Partaking in your on version of this incredible moment and putting themselves in the shoes of people at the time may prove an incredible learning experience for your kids.

What should your child consider when choosing a college?